For our last full day in Hawaii we hiked the most famous trail on Kauai: the Kalalau trail along the famous Na Pali coast!

We didn’t really plan ahead for this trip and so an overnight permit was out of the question (these are booked up far in advance!).  We intended to do a day hike of the Kalalau trail to Hanakapiai beach, and then continue on to Hanakapiai falls (which is the thing that literally every day hiker in the park does).  Because of said lack of planning ahead, however, we didn’t realize that the rules had changed in 2019, and now backpackers AND day hikers all need advanced reservation to enter Ha’ena State Park, where the Kalalau trailhead is located.

All of the parking spaces at the trailhead were reserved, as were the walk-in reservations, and for a moment we thought all hope was lost.  However, David discovered a loophole – a shuttle bus!  If you reserve a spot on the bus for a given time (bus leaves every 30 minutes), this also includes your entrance into Ha’ena State Park and allows you to day hike.  In mid-January 2020, there were many spots left on the bus for the very next day and we booked our spots for the 9am shuttle at $15 per person. 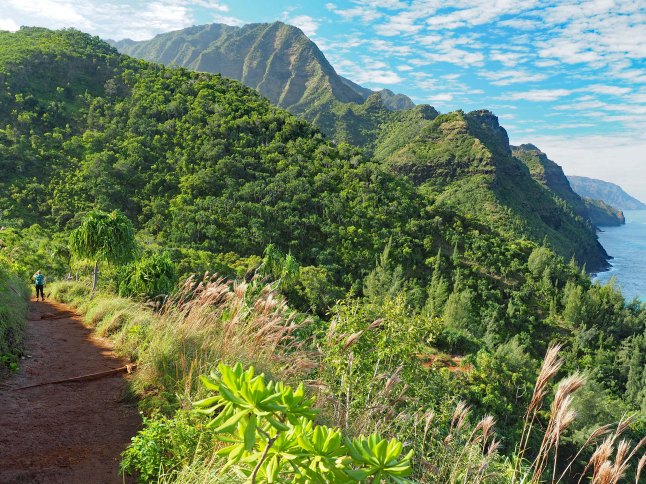 schuyler takes in the views along the kalalau trail

We parked at the Waipa park and ride a little before 9am and hopped on the shuttle.  At this point the shuttle bus driver informed us that the last shuttle left Ha’ena State Park at 4:30pm, so whatever we were doing in the park, we’d better be done by then!  HMMMM.  Welp, if any of us had figured that out the previous night, we would’ve booked spots on a much earlier shuttle! 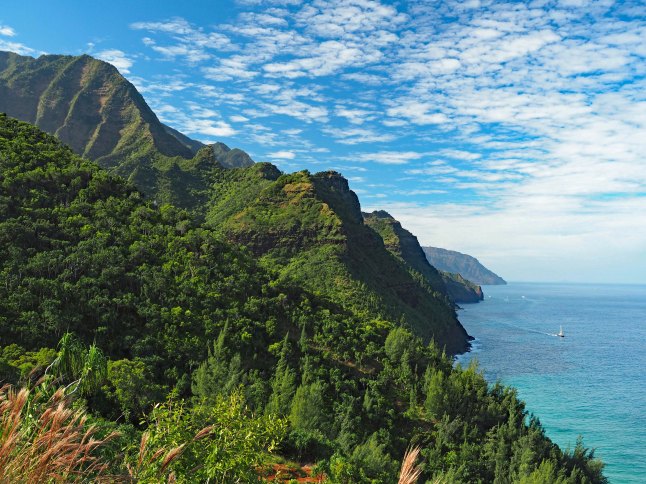 much Na Pali.  so coast.

At any rate, we arrived at the park around 9:30am and were aware that we only had 7 hours to do whatever we were going to do!  The Kalalau trail to Hanakapiai beach is 2 miles one-way with about 600 feet of elevation gain (and then 600 feet of elevation loss).  The first mile is up and the second mile is down, so be aware that at the end of the day you have to do this in reverse!  The trail starts out with a decent incline on rocky terrain, so it gets you sweating quickly!  It then generally transitions to dirt, and as we got closer to the beach, it transitioned to mud (SHOCKING!!).  There are a few open viewpoints of the Na Pali coast along the way, which were particularly spectacular since it was the one and only sunny day of our trip.  We arrived at the beach after an hour of hiking and figured we had PLENNNTYYY of time, easy peasy (ah ha ha…. foreshadowing).

a busy and beautiful hanakapiai beach

At the beach we encountered the first of several stream crossings, and the one that is the most difficult to cross without taking your shoes off, IMHO.  It should be noted that when we visited in mid-January 2020, the trail had actually been closed the week before due to flooding, so I have a feeling our stream crossings were perhaps more difficult than usual.  David decided to ford the stream right where the trail pops out of the woods, but Schuyler and I opted to walk towards the beach and cross where the stream meets the ocean.  While it’s much easier to cross along the beach, the water was just slightly too deep for us to keep our boots on without getting them soaked, so we took them off.

very green trail heading up to the falls

It should be noted that this beach can be quite dangerous, so please be sure to read up on conditions before you head out for the day, and never turn your back to the ocean!

After snacking on the beach, we carried on towards Hanakapiai falls.  This trail is another 2 miles one-way with an additional ~1000 feet of vertical gain.  There is extensive signage so one would be hard pressed to take the wrong trail (and accidentally continue on the 9+ miles of Kalalau trail).  The trail starts off fairly gradually and muddy, and the terrain gets more difficult the further you ascend.

OoOoOOo a peek at the falls on the way up

There were four “major” stream crossings on our way up, with two crossings near the 1-mile mark and two crossings further up near the falls.  These crossings can all be done without taking your shoes off, but require some sure-footed stepping and rock hopping ability.  Hiking poles are VERY helpful (I wish I hadn’t forgotten mine…).  There were also many people who had seemingly given up on keeping their feet dry and simply crossed with their shoes on.

el oh el at the girl posing in the left corner

The last half mile of trail before the falls is probably the most difficult, with lots of rocks and a few steeper sections.  The difficulty is increased because everything is wet and slippery, so careful footing is needed!  This section took us a decent chunk of time, particularly because Schuyler isn’t super experienced with this type of terrain, so less experienced hikers beware! 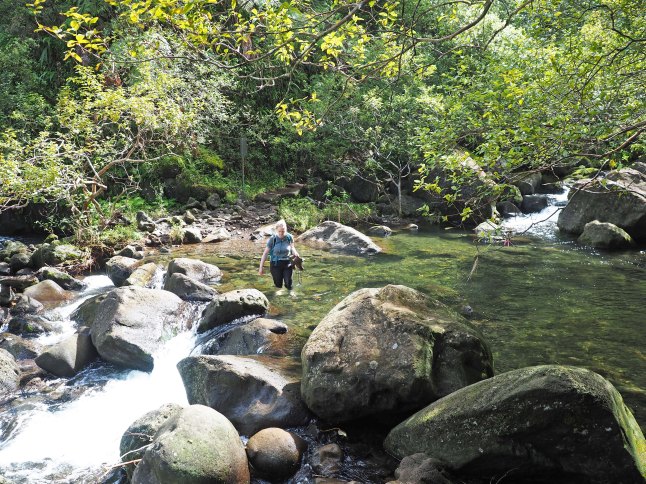 We arrived at the falls about 1.5 hours after we left the beach – sheeesh!  However, Hanakapiai falls are very tall and impressive and worth the effort!  Do not expect solitude here, however, unless you start your day very early.  There were gaggles of other hikers milling about and changing into their swimsuits to take a dip in the chilly water, David included.  I took lots of pictures and repeatedly had to wipe my camera lens free of waterfall mist 🙂 .

After about 20 minutes we decided to head down, cognizant of that 4:30pm shuttle.  The trip down was long, sweaty, and muddy.  Because of the aforementioned rocky and wet terrain, the trail requires more careful footing, and is more arduous for that reason.  Schuyler was getting tuckered out and my feet were pretty tired too!

When we got back to the beach I took my shoes off for the last crossing and then we had to go UP again!  Even though it’s only a few hundred feet, the last uphill is hot and sunny and occurs at the end of the day, so it sure feels like a doozy.  We made it back to the trailhead at 4:15pm – 15 minutes to spare!!! Eeeep!  While this trail is only 8 miles long, the more difficult terrain made it more time consuming than the other Kauai trails we experienced.  There are also lots of scenic locations where you’ll want to sit down and take in the views.  For these reasons, I’d budget at least 7 hours for this hike …and definitely take an earlier shuttle than the 9am 😛 .

so boat. much rocky shoreline
tiny hikers on a big island
channel islands on a very clear day!
one last picture of mittens casting shadows on other mittens
view from the top of angel's landing, shared with 10000 of my closest friends
i enjoyed this